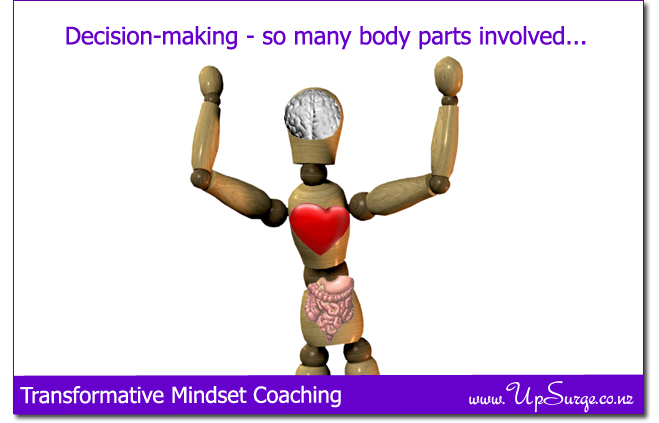 Decision-making – so many body parts involved…

Did your granny know it in her bones or was it her waters? Life is complicated and choosing from the plethora (such a cool word) of options in modern life can do your head in. Which brings me to an interesting point – is it your head that carries the burden of decision-making? People talk about knowing things in their gut, in their heart, in their bones, in their waters – lots of body parts involved there. How about beyond our bodies –  in the stars, in the clouds, there was a sign, divine intervention, from an angel, from a dream, a hunch, synchronicity…I could go on and on and often do but I will spare you.

Are you decisive or more down the decision phobic end of the continuum?  Preferring to use the ‘oh shit I just have to decide so pick one – any one’ method or the tried and true ‘la la la – not thinking about this/head in the sand/make it all go away procrastination’ approach.  Maybe you take a pick and mix style of sometimes being very clear on what gets the thumbs up and other times you find the waters of decision-making so murky that they get silted up and stop flowing altogether.  Well, you are soooo not alone!

Ready to rumble – ‘logic & reason’ battling it out with ‘feeling & subconscious’

With all the body parts that have a say in decision making it’s no wonder we can get analysis paralysis.  We could group these sources of information into two camps – in the red corner we have ‘logic & reason’ battling it out with ‘feeling & subconscious’ in the blue corner.  Often we are taught to value ‘logic & reason’ over the more woo-woo ‘feeling & subconscious’ but what if it wasn’t an either/or approach – what if they worked in concert making beautiful music together helping you find a solution that wouldn’t be possible if you only used one of them? Take the inventor of the sewing machine  – he had been struggled to make his invention work until he had a dream that he was being attacked with a spear with a hole through the middle of the pointy bit – voila – problem solved! He initially employed all his powers of logic and reason but came up short until his subconscious, via a dream, presented him with a solution.  “Fortune favours the prepared mind” from Dr Louis Pasteur hints at the dance between logic & reason (prepared mind) and feeling & subconscious (fortune).

I use a creativity technique where I throw every piece of information I have into a metaphorical cooking pot ie. research, contemplate, experiment, compare etc, and then I put the lid on and leave it to cook (in a pressure cooker if I have a delivery deadline, but a long, slow cook can create a tastier outcome). I trust that my subconscious is keeping the pot bubbling away and will deliver a delicious decision when it’s cooked through. Often this decision is delivered in the shower – weird ha?? One thing I have noticed that makes the decision-stew bitter (how long can I work this metaphor before it’s just naff?) is if I get worried about whether other people will think ie. sprinkling some ego on it. This is akin to serving your decision to a mythical ‘they’ jury with a side order of self-worth. It’s going to end in tears and probably snot in my case as I seldom get the tears without the nasal encore.  Some people cry so elegantly – that’s not me…(probably a little too much information).

Who are ‘they’ anyway? Our own personal paranoia police? Are ‘they’ the ones who take a point off our global ‘You’re a good person’ brownie points tally? Reality check – we often don’t know how our decisions are going to impact us and we certainly don’t know how they will be perceived by others.  I invite you to do yourself a favour and stop making up stories from other people’s points of view eg. ‘Look at her, she thinks she is so [fill in the blank]’ or ‘He is such a [fill in the blank]’.  Alarm bells go off whenever I hear my self-talk go into third person and a quick ‘get the hell out of their head’ seems to stop that train. ‘They’ can’t TAKE your personal power, only you can GIVE it away and you are not a ‘personal power charity’ so hang on to it! Personal power is a non-transferable currency anyway – you don’t increase yours by robbing someone else’s.

Are you expanding?  In a good way!

If you find decision making a kicker then silver-line the living daylights out of any decision by coming from a place of gratitude for your life lessons. Own it baby! If you are ruled by logic & reason then you could practice doing a body check-in.  Just say or read each option in turn and pause to see if an option makes you feel ‘expansive’ or ‘smaller’.  Expansive is what you are looking for – this is your intuition saying ‘yes, bring it on’ even if you are not quite sure if the tingling is excitement or fear. Intuition loves being invited to the party and will turn up uninvited after a while because it will know it’s always welcome.

If you liked this then please make the decision to share it with your friends – who needs to hear this most?  Trust your intuition!